In 2011, Mihai Neșu was making a difference on the pitch for FC Utrecht and Romania’s National Football Team. He chased his dream until one day, when he got injured in one of the last training sessions of the season. This incident got him confined to a wheelchair.

7 years later. Mihai is an example for all of us because he is carrying his cross in a brave, generous and optimistic manner. He came back to his hometown, Oradea and from a powerchair makes a difference bigger than we could have ever imagined. He founded a Foundation, which offers treatment and recovery to children with neuromotor disabilities and from the autistic spectrum and all his financial and time resources go towards this project.

Last weekend I went to Oradea and helped to pull together ‘Uniți pentru Mihai’. Three football matches followed by a gala were organised to put Mihai first for one day a year. To raise money for his treatment and recovery for the coming period.

And it was astonishing how three generations of football talent got together to celebrate, but at the same time to help Mihai. Some of Romania’s finest such as Hagi, Popescu or Lupescu, Steaua’s 2006 team with Rădoi, Ogăraru, Dică and Goian and current national team players as Răzvan Marin, Keșeru, Ianis Hagi or Micovschi came to Oradea to entertain 11,000 spectators and remind everybody about the peak times of Romanian football.

Don’t think that Mihai stood aside… The day before the game he was at the stadium, making sure that everything was in place. Just as he did day after day since the announcement of this event, he played an instrumental role, not passing along any responsibility or challenge.

It was a family friendly show, governed by friendship, compassion and respect. The kind of event that can be a powerful lever for change and inspire the next generation of sporting talent. Mihai and his former team-mates taught us an important lesson – unity, bravery and proactivity can help anyone achieve anything. And in football, these values can produce a movement that will generate change, for a more inclusive, healthy and active society.

I am extremely grateful for the chance to have been involved and absolutely inspired by the success of the event. There are no words to describe what an extraordinary job have done Andreea and George Ogăraru.

You can still help Mihai Neșu by making a donation in one of the accounts below. 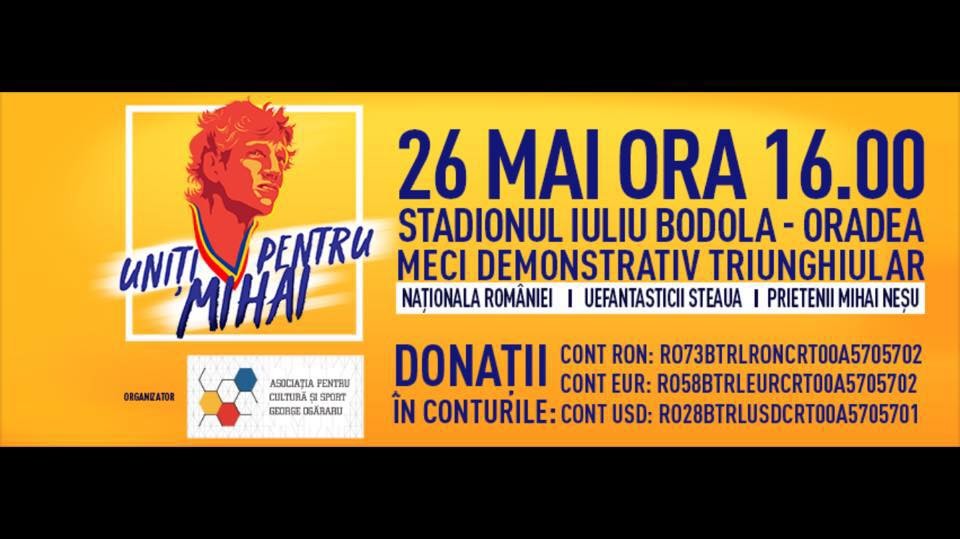